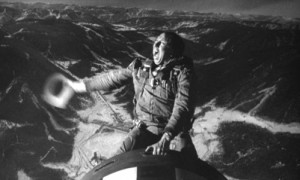 The U.S. Air Force announced today that it had fired nine officers following investigation of a cheating scandal.  The officers all were based in a special nuclear missiles command at Malmstrom Air Force Base, in Montana. The Air Force said that the officers had created a culture that enabled such cheating by dozens of airmen.  The Air Force also plans disciplinary action against many others involved in the scandal.

The errant airmen cheated on a technical qualification exam—for duties involving responsibilities for nuclear-armed intercontinental ballistic missiles.  According to the Washington Post, “Investigators found that many airmen were sharing test questions and answers by text messages. In at least one case, officials said, classified material was exchanged in that manner.”

Air Force Secretary Deborah Lee James admitted to a news conference today, “We do have systemic issues in our missile community….And of course, this was a major failure of integrity…”  The Air Force commentary emphasized both the need to change the enabling culture and to revamp motivation structures that put sole stress on the exam as a means of promotion.  It also emphasized the principle of accountability by officers.

Interestingly, the statement did not raise what might be highly pertinent questions about the psychological assessment of individual candidates for such high security roles.  The Air Force found that only 92 airmen were implicated in the cheating scandal, out of 36,000 involved in the mission.  What distinguished these 92 persons?   Could character assessment help ferret out many of such individuals prior to admittance in the program?   To further such goals, psychological assessment company Veris Benchmarks has developed innovative psychological tests honing in on the trait of trustworthiness.

Andrew Szabo, Director of New Business for Veris, commented: “We admire the forthright and searching statement by Secretary James.  When the issue is as fundamental as national and international security, the Air Force clearly wishes to consider broadly the practices that could prevent such a profoundly troubling failure in integrity.  We submit that psychological assessment of trustworthiness needs to be considered as part of such a program.”

← Is Your Company Hiring Wolves?
Knowing Whom To Trust With Your Money Just Became Much Easier To Predict →